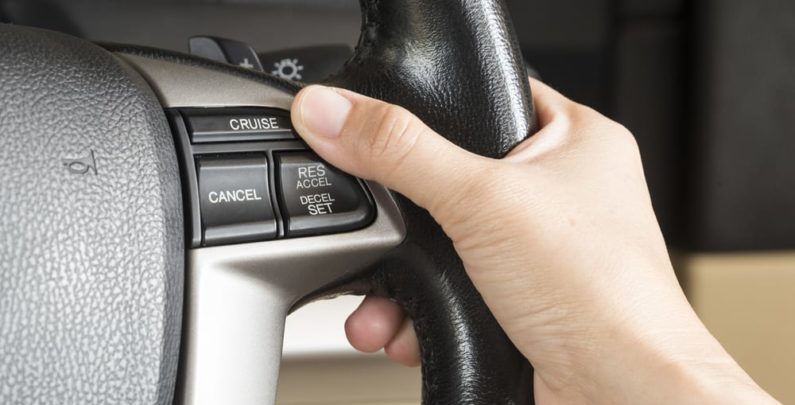 From the National Safety Commission:

Rain presents two distinct dangers to a driver; both with essentially the same end result. After a dry spell of any period, accumulated oil, grease, and dirt on the road can create extremely slippery conditions. The roads are most dangerous just after it starts to rain when a light sheen of water is standing on the road. The oil, grease etc. rise up in a layer on top of the water creating conditions similar to ice on the road. It creates such a problem during the summer thunderstorm period in the southeast that it is referred to as “Florida ice.” After a period of heavy rain, the oil and grease will wash off the road and the slippery conditions diminish.

Heavy rain however creates a separate and equally dangerous situation. When water stands on the road, it can become deep enough that the tires can’t squeeze the water through the tread fast enough. When this happens, the tires can actually rise up on top of the water and ride across the water like water skis creating a condition known as “hydroplaning.” Hydroplaning can start at speeds as low as 35 mph and becomes especially dangerous at speeds above 55 mph. The higher the speed, the greater the chance of hydroplaning.

In either situation, the first step a driver should take to counteract skidding is to take his/her foot off the gas pedal in order to slow the car’s speed. Unless you have anti-lock brakes, you shouldn’t apply the brakes until you have the car under control and the speed is reduced. Applying the brakes in a car without anti-lock brakes only adds to the problem. Grasp the steering wheel in both hands, steer toward the direction of the skid and then steer to keep your car centered in your lane.

This is where cruise control presents a problem. Cruise control will want to keep your vehicle going at a constant speed and speed only adds to the problem. Cruise control is disabled when you step on the brakes but that is exactly what you don’t want to do in a skidding situation unless your car is equipped with anti-lock brakes. The safest thing to do when it starts to rain is to disengage the cruise control and lower your speed. Driving in the rain really requires heightened awareness and that seat-of-the-pants feel for the car. Save your cruise control for fair weather.